November 12, 2014
I’ve always had a fascination for mannequins. I find them creepy but intriguing at the same time. They seem so life like but yet cold and distant from being human.
Mannequins come in different styles and looks. Some are very chic and elegant where some are downright tacky.

Whenever I see some I like to take photos of them.

I can almost hear them talking to me as they look at me in their bored, condescending manner. And why shouldn’t they be condescending? After all, they’re so perfect with their classic features and slim figures. Their hair and makeup are always perfect. And of course, their clothes always look good. No dirt or food stains on their outfits.

These mannequins I saw at the Rideau Centre were totally white with strong chiselled features like Greek and Roman statues. 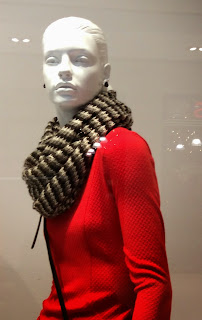 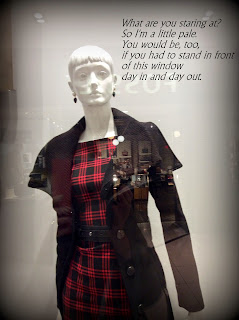 These ones in Toronto had bald white heads like aliens. I didn't like them as much as the ones with actual hair and facial features. 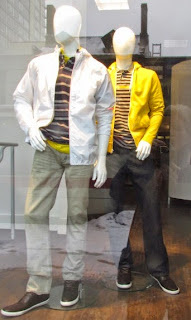 This one in Montreal didn’t even have a head. 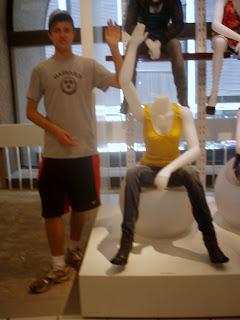 I almost expect them to start talking to me. If they did, what would they say or do?

I wrote this story as I pondered that very idea.

Here is the mannequin I picture as being Paul in the story. 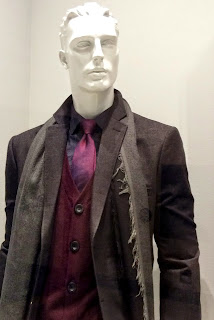 “What? Who said that?” Brenda looked around wondering who was talking.

Brenda stared at the talking male mannequin on the platform. He was as handsome as a Greek god statue with strong chiselled features. And of course he was dressed to perfection in the latest fall fashions.

She stared wide-eyed at him. “How do you know my name?”

“I know everything about you. I stand here day after day observing and listening to you.”

“That’s creepy! Are you stalking me?” Brenda said, biting her nails the way she always did when she was nervous.

“No, it’s not like that at all. I think you’re wonderful. Could you help me out, Brenda?”

“You heard me. I’m tired of standing here under these fluorescent lights day in and day out. I need some adventure.”

“Wouldn’t it be a bit obvious if I took you? The store would say I was shoplifting. You’re wearing their clothes.”

“Take the clothes off me then. I don’t care.”

“I can’t do that either. That would be indecent.”

“Oh, don’t worry about that. I’m not anatomically correct. And I don’t feel the cold either. I spend most of my time naked in a closet anyhow. Luckily Sadie, the wardrobe girl decided to use me for this fall display. That’s why I need to plan my escape before she shoves me back in that closet again with the other mannequins.”

I stood there and pondered my predicament.

“So, are you going to take me with you or not?” he finally asked.

“I’m sorry. I can’t.” I turned and walked away. For the rest of the day, I avoided that section of the store.

Later that night at home, just as I climbed into bed, I heard a whisper.

I flicked on the light and grabbed my can of pepper spray that I kept on my bedside table for sleepovers that got out of hand. “How did you get here? I thought you couldn’t walk.”

“Funny about that. I’d never tried to walk before. Imagine my surprise when I found out I could.”

“But you are an object. You’re a mannequin.”

“It was foolish coming here,” Paul said, a sad expression on his face. “I thought you’d understand how I felt about you. I’ll go.” And with that he opened the door and left.

The next day Brenda arrived at work and saw that Paul’s spot was empty. Why did she feel so sad about him? What was wrong with her?

Sadie approached, an angry look on her face.

“Have you seen the mannequin? The boss is boiling mad that it’s missing and he’s blaming me.”

“No I haven’t seen Paul, er it,” Brenda lied. Sadie gave her a puzzled look and Brenda just shrugged.

Where could he have gone?

After work, Brenda walked along the sidewalk, her head down against the cold autumn wind.

She turned towards the voice and couldn’t believe it. There was Paul and he wasn’t a mannequin anymore. He stood outside the Party Place dressed up in a pirate costume.

“That’s right. Isn’t it great?” he said. “I got a job at the Party Place since I’m so good at dressing up and standing still for long periods.”

“But how did you become a man?”

“I believed I could walk so I decided to try believing I was a man and it worked. Pretty cool, eh? I only have one thing left to do.”

“This.” He swept Brenda into his arms and kissed her. His warm lips were definitely human and not made of cold fibreglass.

“We could try it out and see,” Brenda said, still in a daze from the kiss.