Showing posts from February, 2013
Show all

February 27, 2013
WRITER'S PAGE Cathy Graham Fiction writing ~ Article writing Summary I am an imaginative creative writer who enjoys playing with words like a kid  with crayons. If it isn't fun, why do it? Skills and Expertise I write short stories, poetry and plays for children and adults. I strive to write stories that uplift and entertain. Even if the story is sad, I always try to include a message of hope. I also enjoy writing a good tingly romance or an uplifting story where I can escape into my characters' lives. I also write humour, nonfiction articles and press releases. Experience and Qualifications I have had several short stories published online and in print magazines and anthologies. For a list of publications, see http://cattitudeandgratitude.blogspot.ca/2013/02/blog-post.html I have taken many writing courses over the years and have attended workshops and retreats. I have taken the two children’s writing courses given by the Institute of Children’s Li
Post a Comment
Read more 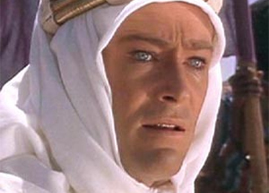 "All men dream, but not equally. Those who dream by night in the dusty recesses  of their minds wake in the day to find that it was vanity;  but the dreamers of the day are dangerous men,  for they may act their dream with open eyes, to make it possible." -- Lawrence of Arabia (Thomas Edward Lawrence) (1888-1935)  British Soldier, Arabist, and Writer Vanity? Dreams show your vanity?  Not sure I agree with ol’ Lawrence but hey, didn’t Peter O Toole look dreamy wearing that sheik outfit in the movie, Lawrence of Arabia with his blue eyes against his tan and the white? Night dreams don’t do that much for me since I tend to get a lot of nightmares, but daydreams, well, now you’re talking. Now Lawrence and I are on the same wavelength.  Without daydreamers daydreaming great ideas, the world wouldn’t be as amazing as it is. I’m a daydreamer from way back. Used to drive teachers crazy when I was supposed to be paying attention in class
16 comments
Read more

February 08, 2013
Remembering... Another year has gone by and I reflect on what it would have been like to have our daughter Laura celebrating her 21 st birthday today. Instead, we have our two sons, Rory and Eric, 19 and 17. I’m very grateful to have been given another chance to be a parent. Many bereaved parents lose children and never get the chance to have another. I feel very fortunate and don’t take any of it for granted as it can all be gone in an instant. I am a person who strives to look for the positive side of life. Some days this is easier than others. Though I fail to see much positive in Laura’s sad and tragic death from forceps injuries at 6 days old, the outcome is that I have been given such insight to grief and suffering that I never had before. Instead of just reflecting on feelings of sadness today, I decided to think of useful tips I could offer for how to support those who have suffered loss. My advice to helping those dealing with loss of a loved one would be:
2 comments
Read more 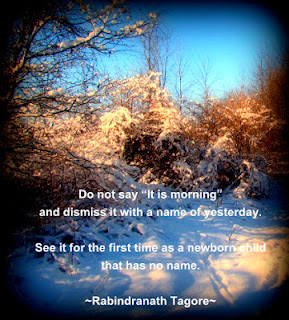 I was introduced to Rabindranath Tagore last year when my family and I had the pleasure of attending an event devoted to this poet, philosopher and Renaissance man from Bangladesh. http://en.wikipedia.org/wiki/Rabindranath_Tagore This quote resonates with me today and I was inspired to make an inspirational poster out of it. I like the idea of each day being brand new like a newborn child that has no name. It echoes with possibility and allows us to create something completely new, free of the mistakes and regrets of yesterday. Like a blanket of clean snow waiting for our footprints, this day is pure and ready for us to make an imprint. Make it a good one!
Post a Comment
Read more

If you could be an animal, what would you be and why? 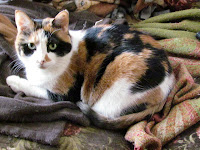 Everyone who knows me knows how I love cats. I plaster my Facebook wall with cat photos, cat illustrations and cat jokes. I even have good Facebook friends who are cats like B.f.Thorneycroft, my parents' orange cat and Gordon Drummond, a cheeky white Persian who lives in New Zealand. My two cats, Daisy and Rosie, are my constant companions and I love them both so much.  As you can see, I identify strongly with cats. My nickname is even Cat. Meowwww! Cats are such creatures of contradiction. I am very similar to a cat in personality as I am an introvert and can be aloof and independent not needing anyone. Sometimes I even crave it. Then in the next moment, I become loving and affectionate, wanting to be with people. I anger easily and my claws come out so watch out. But then that anger is gone as quickly as it came and I am loving again. I am fairly relaxed and like to lounge about like a cat. But if I’m pushed or startled, I’m on my feet and ready for con
1 comment
Read more
More posts