Memory of a Very Different Christmas

Today's topic is Memory/Memories. I am planning to relate each topic to Christmas since it is the Christmas season.

I have many memories of Christmas but one that stands out in my mind is Christmas 1997 which we spent in Canada’s Arctic region.

That Christmas we were thousands of miles North in the tiny community of Gjoa Haven, Nunavut, located on King William Island in the Arctic Ocean. 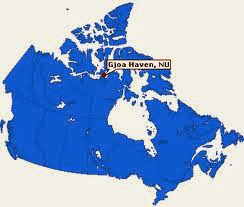 We arrived there in August and were there for the eight long months while Brian worked as an adult education teacher.

As a rugged Canadian, I like it to be snowy and wintery for Christmas, but must admit Gjoa Haven was a bit too wintery for my liking. The brutal Arctic wind and the constant darkness were unlike anything I’d ever experienced.

I was home with my two boys who were two and four at the time. We hardly ever went outside due to the intense cold that could reach -60 C with the wind chill.  Luckily the Inuit kids were friendly and would often visit to play with the boys and do crafts and baking with me. I think their visits helped keep me sane as the cold, isolation and darkness were often overwhelming.

Christmas in Gjoa Haven was definitely not the same as back home in Ottawa. There were no decorated Christmas trees or lights, inside or out. Since Gjoa Haven is above the tree line, it has no trees due to the permafrost. They could have used artificial trees, but the Inuit didn’t seem to embrace the Christmas tree tradition that much anyhow.

They did embrace the other Christmas traditions of feasting, partying and gift giving. They also loved games. Every night for two weeks during Christmas and New Year’s, they would have a feast at the community hall and play competitive type games well into the wee hours of the night. I remember going once just to watch and feeling as if I was in a foreign country.

I admit I felt sad and lonely so far from our families at Christmas time and I missed all the familiar traditions.

The Non-Inuit teachers tried hard to bring some of the familiar Christmas traditions to that remote Northern town. The school held a Christmas pageant and I got to play flute with the choir. I still remember kids doing a cute skit they made up about Mr. Bean coming to Gjoa Haven.

Everyone lived in houses, had Satellite TV, and were quite familiar with North American culture. It was fascinating to see the Inuit culture evolving with the contrast of the old ways against the new ways. I imagine it’s even more that way today with the improved Internet which was still fairly new back in 1997.

As another Christmas approaches, I think back fondly on that time sixteen years ago. At the time, I was counting the days until our return home. Now I feel lucky that I had the chance to live among the Inuit and experience Christmas in such a different way. 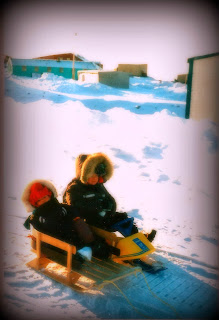 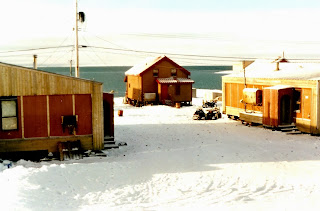 Here are some photos of my sons and a view out to the Arctic Ocean. These were most likely taken in September while there was still light and the Ocean wasn't frozen over yet. I don't have too many outdoor shots from December as you can well understand!