July 13, 2015
These quizzes are always good for a chuckle or a grimace, depending on if you like them or not.

I enjoy reading other peoples' answers and learning a bit more about them and of course I enjoy doing them for that narcissistic high I get talking about myself. Hehehe! Just kiddin!

I like quizzes. Didn't you ever do all those silly quizzes in Tiger Beat and Seventeen when you were a teen? I know I did, even if they were completely silly which they usually were. I occasionally do some on Facebook but some are really silly so I try to limit myself since I waste enough time on Facebook as it is.

Feel free to read or not. If you want to do your own quiz, feel free to do that, too. 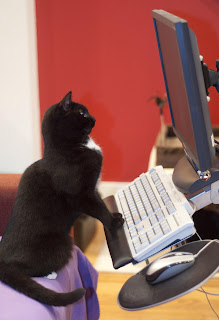 Photo Credit to MIPhoto at Morguefile.com. I do have a photo of my orange tabby Kobie draped across my computer from a while ago. I didn't want to spend a lot of time searching for it since all my old photos are in backup files on my other computer which is a pain in the butt.

This one is very cute!

FOUR THINGS OTHERS CALL ME OTHER THAN MY NAME
Cat, Cath, Dear, Mom

FOUR JOBS I’VE HAD
* Desktop publisher (kind of a glorified clerk who knows typography and graphic junk),
* envelope stuffer in the bowels of Place Ville Marie in Montreal,
* military musician in the air Reserve,
* opaquer (Painter) of cartoon cells for animated cartoons. (the place went bankrupt and we all got laid off, but I met the hubs there so I did okay)

FOUR MOVIES I HAVE WATCHED MORE THAN ONCE
* Jane Eyre (BBC 2006 version with Toby Stephens as Mr. Rochester. Drools. I'm overdue for a fix when the hubs isn't around as he hates those melodramatic type shows)
* Sound of Music
* Oliver
* Les Miserables

FOUR PLACES I’VE BEEN
* Devon (A gorgeous part of England on the ocean)
* Rome (So vibrant and full of history)
* New York City (So exciting and too much to see but that’s okay. Gives you a reason to go back!)
* Salzburg, Austria (Saw all the Sound of Music landmarks. What can I say? I love that movie!)

FOUR PLACES I WOULD RATHER BE
* Cape Breton, Nova Scotia (My parents are there and I love being by the ocean and the Bras D’Or Lake. So unspoiled and time stands still there.)
* New Zealand (my friend Lee sure makes it look like paradise where she lives)
* Australia – hope to go there some day and meet some friends. Seems so different and yet so similar to Canada.
* British Columbia – haven’t been back in years since going to the School of Music in Esquimalt. So beautiful there. Maybe I’ll go visit Elly some day.

FOUR TV SHOWS I WATCH
Don’t really watch TV since we gave up our satellite dish and now I mostly watch movies. I don’t miss it. Too many dumb reality shows for my liking. I did watch season 1 of “When Calls the Heart” on Netflix. Talk about sweet and sappy overload. I liked it for the most part but it was awfully sweet. You can tell it’s done by Michael Landon Jr keeping on the tradition of his dad who did “Little House on the Prairie” back in the 1970s which I also watched since I loved those books by Laura Ingalls Wilder.

Wish they had made When Calls the Heart it a bit more Canadian feeling since it was supposedly in a mining town in Alberta based on a book by author Janet Oke. Oh well. Beats the heck out of all the gritty realism of Dexter or the inane stupidity of Trailer Park Boys, two shows my sons have watched. BLEK!

FOUR THINGS I AM LOOKING FORWARD TO THIS YEAR
* A trip to Cape Breton to see my parents and be by the Atlantic Ocean
* A trip to Nashville in the States to meet critique partners. Hope that works out.
* I hope to make money doing creative things online such as my photography and artwork. It still eludes me so far as I don’t know the secret to good marketing techniques. Good thing I’m enjoying the process and I like learning new things. I haven’t given up yet.
* Playing flute and singing with my different musical groups for seniors’ residences and other events. It doesn’t pay much either but I enjoy it and it reaps other rewards. Some things are much more valuable than money.