The Saffron Gate - A Book Review 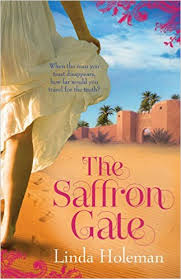 The historical novel of “The Saffron Gate” by Linda Holeman grabbed hold of me and wouldn’t let go. Linda Holeman, a Canadian writer, has a wonderful gift of writing historical fiction with descriptive details about the setting, making the story come alive without losing our connection to the characters and their plight.I have read many of her novels and always enjoy them.

Often some books get bogged down describing too much and we lose sight of the story. I find that Linda Holeman is adept at balancing all the many elements that go into a good novel. As a fiction writer myself, I know how hard it is to get it right and often struggle with all those elements.

The story begins with Sidonie O’ Shea, a young woman with a French Canadian mother and Irish father in Albany, New York in 1930. She suffered polio as a child leaving her with a crippled leg and this has made her very reclusive and shy.

A car accident that kills her father haunts her with guilt since she was the driver. She retreats into her lonely little life until she meets Etienne, a French doctor, who treats the scar on her face resulting from the accident. She falls in love with him and becomes pregnant. Joyously, she tells him the news in hopes that they will marry, but instead, Etienne disappears. Full of despair, she realizes she can’t bear her reclusive life any longer and sets out to find Etienne after hearing that he has gone to Marrakesh in Morocco.

The sumptuous descriptive details that Linda Holeman paints about Morocco drew me right in and made the story come alive. I could see it, I could hear it and I could practically smell it, too.

I was especially captivated by the character of Aszulay, a Taureg, a Blue man from the ancient Berber nomadic tribe of the Sahara Desert. Aszulay was a wonderful character, so exotic and mysterious, but also a real man with real emotions. I was intrigued about why they were called Blue Men and researched it. I found out it is because of their blue turbans and robes, dyed indigo from the ink of Mediterranean sea urchins.

I love reading and learning about other countries and cultures that are so different from my own, especially in historical fiction. It was a very enjoyable book with its exquisite detail and wonderful story. Mostly I enjoyed it because of the protagonist of Sidonie, a real woman I could connect with. She grew so much in character as she overcame many obstacles on her journey to find love and sense of belonging. I recommend this book highly.