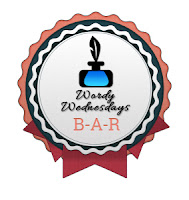 Also thanks to my angel and fairy friends for the inspiration as you can see by these photos I took on a walk a few weeks ago.

The knocking on the screen door roused Max from a sweaty dream he was having about his sexy neighbor Jackie sunbathing in her backyard. He sprang from the lounge chair and opened the screen door. Looking around, he couldn't see anyone and he swore under his breath. It had been such a good dream. If only he had that much luck with Jackie in real life.

“Down here,” the voices said. He looked at his feet to see two lawn ornaments, a fairy and an angel glaring at him. 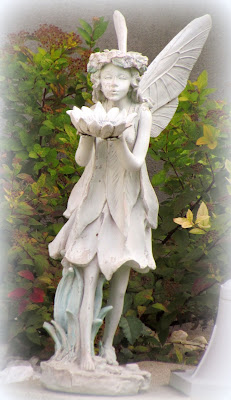 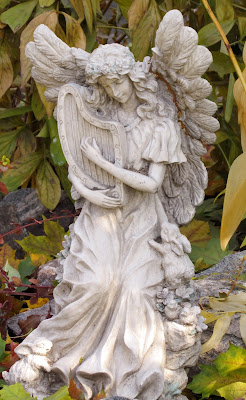 He rubbed his eyes, not sure he was fully awake.

“We want to talk to you about Romeo, that new garden gnome you bought on sale at Home Depot,” the angel began. “You have to get rid of him. If I hear another one of his risqué jokes, I’m going to be sick.”

“Also he’s totally perverse and can’t keep his hands to himself,” the fairy complained rubbing a sore spot. “He pinched my bottom.”

“I must be dreaming all this,” Max said in disbelief. “Statues don’t talk.”

“Hiya Max, ol pal,” shouted Romeo, the garden gnome from the roof top where he was guzzling a beer. “Hey, I saw Jackie. She is something alright. I can see why you watch her all the time. I told her you have the hots for her.”

“Where did you get that beer?” Max demanded.

“From your fridge of course,” Romeo said letting out a loud burp that made him lose his balance. He swayed back and forth and tumbled down the side of the roof. Clinging to the eavestrough, it finally broke and he fell to the ground, landing on soft grass.

“See what we mean?” the fairy said. “He’s out of control. You have to do something."

“Get rid of him!” the angel cried, and the fairy clicked her tongue in disgust while shaking her head.

“That does it,” Max said grabbing Romeo by his green cap. “I’m taking you back to Home Depot. I only bought you because you were on sale. Now I see why.”

Max tried to return Romeo but Home Depot wouldn’t take him back. Finally he abandoned Romeo in a remote alley and drove away.

One morning Max was retrieving his mail and a postcard fell at his feet. He reached down and looked at the photo in disbelief. 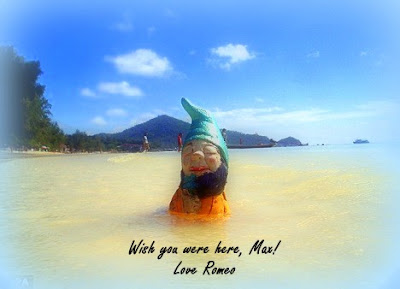 Someone approached behind him and he turned to see Jackie in her bikini.

“Hi Max,” Jackie purred in her sultry voice. “It’s such a hot day. Want to join me for a dip in the pool?”

“Why sure!” Max said with a big grin. Maybe Romeo wasn’t so bad after all. At least now Jackie knew he was interested. He followed Jackie to the pool in eager anticipation.

“Would you like a cold drink, Max?” Jackie asked, pouring some lemonade into a glass from a big pitcher and adding some ice cubes.

“Would I ever!” Max said, licking his lips.

Jackie came closer and poured the glass of cold lemonade down the front of Max’s bathing trunks. She then pulled out his stretchable waistband and dumped ice cubes into his pants.

Max yelped at the cold shock and even more at the even colder look in Jackie’s eyes.

As he retreated back to his yard, he could hear tinkly laughter and applause coming from his garden.